In this blog, we take a look at the Kona bike course and how the weather might play a role in today’s Women’s Ironman World Championships.

The Ironman World championships are taking place in Kona, with the women’s race starting at 5:25pm UK time today and the men’s race taking place on Sunday evening. Amateur races are taking place today. The bike course in Kona is boring, on paper, but the weather can play a role. In Ironman branded triathlons, athletes are allowed to ‘half draft’ at 12m behind the rider in front of them. This can make a significant difference to the amount of power required to hit any specific speed. Fortunately for strong bikers, there are often cross winds! These are so strong that disc wheels are actually banned for this race.

When you’re riding along a road, your speed is determined by the amount of force being pushed through the pedals and the amount pushing you back (in the form of air resistance). Having a rider 12m in front of you will decrease the amount of air that you push out of the way – this is because the rider in front is doing it for you. If you have a train of riders, which tend to form at Kona, further down the group riders are ‘hardly pedalling’, in the words of Alistair Brownlee. Cross winds provide a component of force from a new direction, a direction which is not protected by the rider in front. This reduces the impact that a (legal) drafting train will have – suiting the stronger riders more.

The course in Kona is not particularly hilly, with only a small amount of elevation and no steep gradients. This means that the wind is the main player in breaking up the race (other than the swim). By making use of myWindsock’s planner feature, we can work out the point in the course where the weather will have the largest impact.

In Kona, the fastest women will dip under 5 hours on the bike. As these will likely be the main contenders we will use a bike split in this region for our model. This is the sort of numbers you might see, obviously there will be athletes both slower, faster, more aero and less aero than this.

One thing we notice is the ‘wImpact’ score of 3.3%, this means that an athlete has to ride 3.3% harder than they would on a day with no wind. This is remarkably low for Kona, which usually is heavily impacted by the weather. 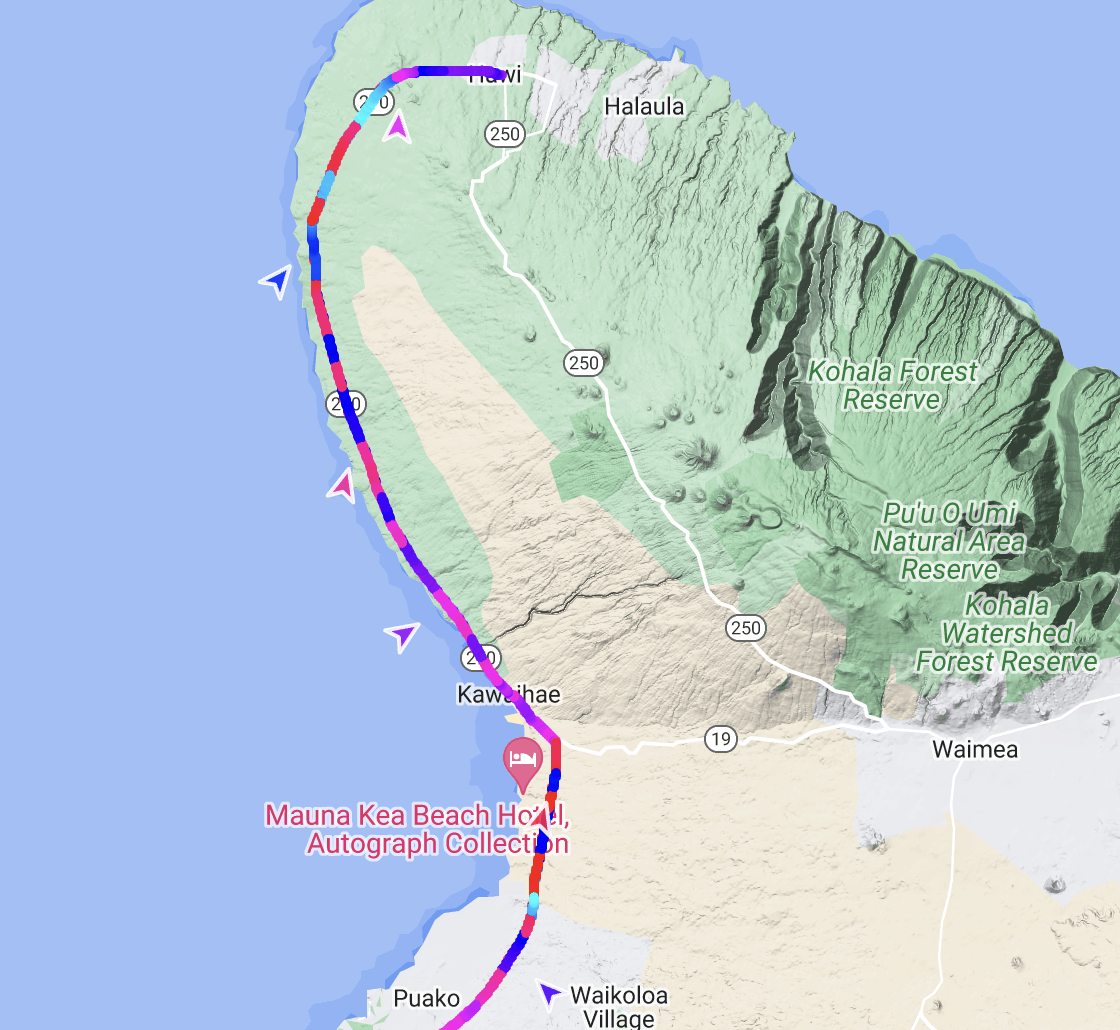 The most interesting part of this course, and the point where stronger riders will attack, is around the halfway point. This is what’s shown in the picture. In the kilometres leading up to Hawi and back there’s a light cross wind, but it’s also a drag uphill to the turn around. This will be the point during the course where the drafting effect of the train will make the least difference. Expect the attacks to start around Waikoloa and last until the end of the bike leg. The headwind on the way back will potentially serve to bring groups together slightly, but it’s only light. If the race hasn’t split up by the time they get back to Puako after the climb to Hawi, it’ll likely be a running dominated race! Expect to see some quick times with the light winds and potentially a new bike course record from Daniella Ryf.

If you want to have a play with the Kona forecast, have a look here!

Wind Lines and the concept of colours for the depiction of wind direction on a route map is the Copyright of Ben Norbury.

Add Cycling Weather & Analysis to your activities and routes for free.